It isn't bad business that closes a Wal-Mart store. In fact, it is good business that has the retail giant frequently replacing relatively new stores with bigger, "super" ones. With an estimated 350 empty stores across the nation - about 10 in Iowa - communities are facing the problem of filling these big empty boxes. Weekender writer Russ Gifford examines the issue.

By Russ Gifford
(Originally published in The Weekender, 01/26/06)

Like buildings left behind when a mine plays out, the big blue boxes mark places where owners removed silver from the region by 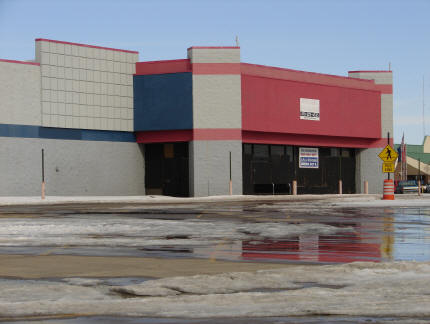 the bucketful. Now the buildings wait for someone with a new vision to prove the structures can once again return to the business of making money. The buildings might wait a long time.

The behemoth sits quietly, testimony to a past that once featured non-stop activity. Now the only movement is the occasional plastic sack fluttering past, or the wind blowing withered brown weeds that grow along the edges of the acres of deserted asphalt parking lot. Fading company colors and the dirty shadows that outline the missing letters quietly attest to their former membership in the world's largest retail organization. Inside, the dust settles on 82,000-square-feet of empty floor space. Where once crowds of people used to shop, the building is now dark and cold.

This description of Sioux City's empty Wal-Mart building on Gordon Drive is not a unique one, though. A recent count shows there are 10 closed and empty Wal-Mart stores in Iowa, and another eight in Nebraska. Sound like a lot? Not to worry, Iowa is no trail-blazer in this category. Texas is home to 38 of Sam Walton's empty buildings, at least as of the end of 2005. It is hard to get an accurate count, but at any moment there are between 350 and 400 empty Wal-Mart buildings for sale across the U.S. The retail juggernaut is not only king of discount pricing, but also king of "dead air."

South Sioux City will soon join Sioux City in the far-from-exclusive membership of towns with empty Wal-Marts for sale. Even though the Nebraska town's Wal-Mart is flourishing in its Cornhusker Drive location, a new store is in the works. In fact, the Cornhusker Drive spot is such a great location that from the roof of the building you can see the footings for the new Superstore rising a few scant blocks away.

Welcome to Wal-Mart, and the new business model of the 21st century.

Business 201 - the 'Wal-Mart way'
The sight of an empty big box store, like the soon to be abandoned Toys-R-Us building near the Southern Hills Mall, used to be a sign that either the business had failed in that location, or that the chain was failing overall. But that's not the "Wal-Mart way." It isn't bad business that closes a Wal-Mart store. It is good business. Even casual observers know these stores aren't dead because of lack of business. They are so successful, they compete with themselves. The question is, are the communities the beneficiaries or the butt of the joke in this new business model?

Wal-Mart was always seen as an unfair opponent to main street businesses, and more than one town has tried to prevent them from coming into the region. Almost all have lost the fight, and eventually, some main street businesses. But it isn't only the small guys that needed protection. Once Sam's economic powerhouse vanquished their bigger competitors, K-Mart and Sears, they turned their economic power on themselves.

"Wal-Mart changes stores as casually and you and I change shoes," says Al Norman, the founder of Sprawl-Busters, who has been fighting Wal-Mart stores for the past 12 years, and has written two books on the subject. With 350 empty stores at any given moment, he has lots of examples to draw from. In Siouxland, the Gordon Drive Wal-Mart in Sioux City closed in 2002 after the chain opened two Super Wal-Marts near either end of the Highway 20 bypass. The Le Mars Wal-Mart closed in favor of a Super Wal-Mart built on the other end of town. Obviously the net result is good for Wal-Mart, but what is the impact on towns and cities?

Don Willoughby, business development coordinator for the City of Sioux City offers his assessment, based on previous studies. "Hy-Vee stores are able to compete successfully with the Super Centers. They'll do fine."

Still, the designation of a Superstore location can send shock waves across a town, and the results are uncertain. Except the results for Wal-Mart.

"Ripping a Town Apart"
"When Wal-Mart comes in, they are not competition for an individual," says Gary Winter, owner of Winter's Main Street Drug in downtown Sauk Centre, Minn. "They're competition for the whole town." Like other economic giants, Wal-Mart tends to make its own rules, and ignores ones they don't like, according to the citizens of Decorah, Iowa. 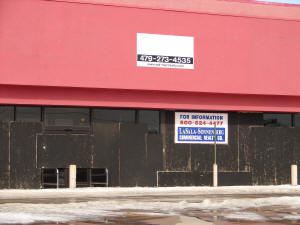 The people of Decorah challenged the placement of the original store in this northeast Iowa community, and then watched as the store abandoned that location to place a new Superstore within two miles of the old one - illegally building in a flood plain. The Planning and Zoning committee noted the problem before the store was built, but a City Council vote paved the way for construction to begin.

The issue resulted in court battles that have divided citizens in the pleasant river town, and even though those opposed to the new Wal-Mart won the case, the new building will remain, and the old building sits empty. As an appeasement, the old store was offered to the City at a dollar a year lease for development purposes. But it turns out dead Wal-Mart stores have strings attached.

For one, competing businesses are not allowed in the former stores. And what doesn't Wal-Mart or Sam's Club sell? The Decorah City Council declined the offer. As has the County. According to Randy Uhl, Executive Director for Winneshiek County Development, Inc., the clock is now ticking for the Iowa Natural Heritage Foundation to decide if they want to take on the project of utilizing the building. But, adds Uhl, sounding perhaps a little testy at the attention this case has garnered, "This isn't just a Wal-Mart issue. There are lots of empty big box stores in Iowa."

This points to an interesting coincidence: Wal-Mart started in Arkansas in 1962, and spread first in the Southeastern part of the U.S. The majority of the empty and former Wal-Marts are still in the South, and one of the few common uses for these buildings appear to be as schools, according to www.sprawl-busters.com, allowed because education is one of the few things Wal-Mart does not offer.

Challenges and Opportunities
The City of Sioux City is actively promoting our empty Wal-Mart building. But finding a business that meets the Wal-Mart approval can be an issue. Says Willoughby, Sioux City's business development coordinator since 2002, "if this was 82,000-square-feet of spec building, it would be gone in a heartbeat." Willoughby said a few call centers have taken a look, but "most of those want 'plug and play' capability," the primary difference between a spec building and an existing Wal-Mart.

But there are positive points to the buildings. Former Wal-Mart's offer wide open spaces, lots of docks, high walls - but not too high. And in Sioux City, the zoning could allow light industrial. It is just a question of finding the right client with the right need.

Lance Hedquist, City Manager for South Sioux City, has garnered awards for 'making things happen' on the economic development front. Where others see problems, he frequently finds the path that leads to opportunity. At this point, all he's saying about the town's soon-to-be-empty Wal-Mart is "We are cautiously optimistic about this opportunity."

It bears mentioning that like those mines in the 19th century that pulled the silver out of the regions by the bucket, all that remains of those operations are the long empty mine shafts and the deserted old buildings - and the personal fortunes enjoyed by the offspring of the original founders. Is Wal-Mart really a new business model - or a new twist to the time honored method of strip mining?