By Russ Gifford
(Originally published on my Facebook page, 05/12/10)

I stopped at Borders bookstore in Portland, Maine, tonight (5/12/2010) to look for a book. I found three - one hefty programming book, one on HTML5, and one on PHP. I only wanted to buy one. TSA inspectors at the airport each Friday had come to scowl at my suitcase. Who knew X-rays can't penetrate 4 or 5 books and require manual inspection? Not that this really stopped me. Tonight at the bookstore there were other books in the stack I was carrying, mostly on American history. I knew I would purchase all those. I would hold the line on the programming books, though: I only wanted one. But which one? 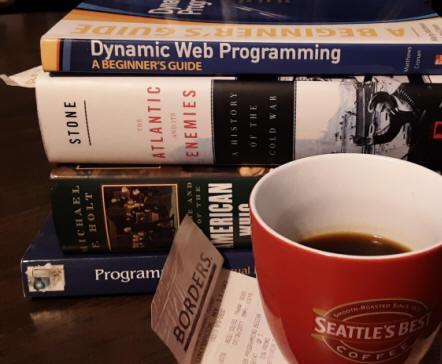 Thus I carried my potential purchases to the Borders coffee shop, ordered a cup of coffee, and looked for a chair to evaluate the books.

It was a crowded night. There was only one open table, a small one, but it was all but touching the next small table, where a wizened older woman sat. She's reading an article on 'How Darwin Got it Wrong' and has an Archeology Today magazine, too.

She looked up as I sat, smiled, and in a quick, clear voice, said, "Interesting books - what do you do and does it have anything to do with the way you think?"

I wasn't planning to chat, but I am Midwest polite. I answered her question, and started reading. But I felt like I was being rude, which is unlike me.

So I extended my hand and introduced myself, and she told me her name. Kathy. I think she said McLane? It bothered me a bit when I heard it, wasn't sure exactly what name she said. Not that it mattered. It was only a momentary meeting, a chance encounter of temporary tablemates, not of any importance. We continued to talk.
I started feeling like the dumb student - one that can't keep up with the teacher. Seriously, she's asking me questions, takes my answers, and races forward. We skip from Chemistry, to Biology to wave harmonics to Sociology to early native tribal customs! In between was Geology and Maine's pre-history. All the while, I am falling further and further behind.
Honestly, I am not used to this. It continues for a while, and I am NOT closing the gap at all!
She comments on audio frequencies, and something clicks in my head. I slide into a Science Fiction dodge, on purpose, and she tracks, leaps ahead. Hmmm.
At one point, she'd told me she worked as a tech at a nuclear plant. (Not a big deal, she informed me. ''When an alarm goes off, the tech is the one heading in the wrong direction - toward the trouble.")
Finally I say it. "What is it you USED to do?"

She tells me she used to be in publishing. When, I asked? 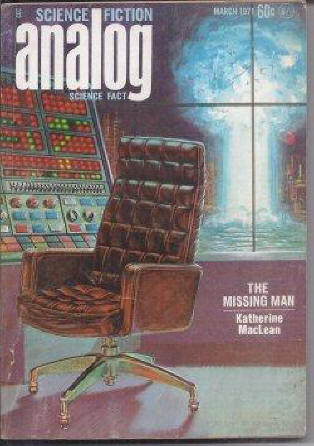 She knew who I meant. Heinlein. Asimov. Pohl. Campbell. Leiber. The young up and comers, Ellison and Silverberg, Tenn and all the rest. All the people I read at a young age....

Her name is Katherine MacLean.

I desperately tried to remember her stories I'd read. I wracked my brain, while still trying to stay with her on her continued rapid fire discussion points. I am reeling. I am trying to guide her into talking about what it was like then, in the late Forties and Fifties, to be writing Science Fiction in a male egocentric world.

She laughs, and tells me the story of how Campbell bought her first story, and then paraded it around the office, telling the other writers "I've got an ENGINEER writing for us now, not someone who gets their science out of high school textbooks like the rest of you."

Of course, she'd sent it in as K. MacLean. The assistant editor told her the story, because she had to stay away or he'd realize it wasn't Kenneth, but Katherine. 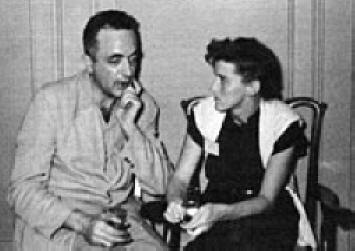 She became the first woman (and for years the ONLY woman) to be taken seriously as an SF writer, until Andre Norton came along. Leigh Brackett was still in Hollywood, and she and M. Z. Bradley were still writing fantasy anyway - not that the world knew what fantasy was back then, but they knew it wasn't Science Fiction. The emphasis on SCIENCE mattered to editor John Campbell. These were the years Campbell was pushing hard to make the genre respectable, and that meant believable science, and fewer cardboard characters.
It is called the Golden Age of SF, and it was.

Katherine MacLean was right there with the boys, making it happen.


(Picture: Fritz Leiber on the left, Katherine MacLean on the right.
From the 1952 World SF Convention)

She told me a cute story dealing with this! In late 1950, leaving the New York City library, she read about a  symposium on the subject of wave harmonics and electronic recognition. Intrigued, she decided to attend and made her way to the hall hosting the forum. Inside, she found everyone there was a radio technician, and all of them were male. She was greeted with some suspicion - until she registered, and they read the name on her lanyard.

They had read her story, and felt she was the only person who understood what they were doing. Much of the symposium was to say, 'THIS story exemplifies the direction we want to go - how do we get THERE from HERE?' She became the informal guest of honor, and the talk became a discussion bouncing ideas off HER. And no doubt, her bouncing ideas and questions off THEM!

She taught for a time in Portland, and had countless other jobs, too. She HAS to be in her 80's by now. HAS to be. She is still sharp, still witty, and still insightful.

I've interviewed statesmen, a foreign minister of Israel and the current VP of the US. [Editor's note: Now President.] I have lost count of the interviews with numerous would-be Presidents. I have spoken with Senators and Governors, numerous writers and lawyers. I've met with the heads of Aerospace departments, History departments and Computer Science types. And, yes, it is true, I am actually friends with a few Rocket Scientists.

Some pretty sharp people, and I've discussed math and history, theory and fact with them all, and held my own. I have rarely been blown off the trail.
But this time? I wasn't even on the same orbital plane with her. What an agile, ageless mind. Amazing. Just Amazing. And to think it happened, by accident, in Portland, Maine. Wow. 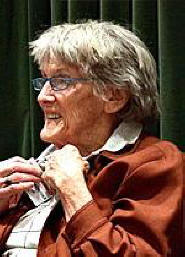 Addendum: Katherine MacLean passed in 2019 and was lauded as one of the premier authors that helped establish SF as visionary. She won a Nebula in 1971, given the Author Emeritus award by the Science Fiction Writers Association in 2003, and in 2011 was recognized with the Cordwainer Smith award. She was 94 years old when she passed. Rest in peace, Ms. MacLean - but I am betting you are still asking rapid fire questions in heaven, too.